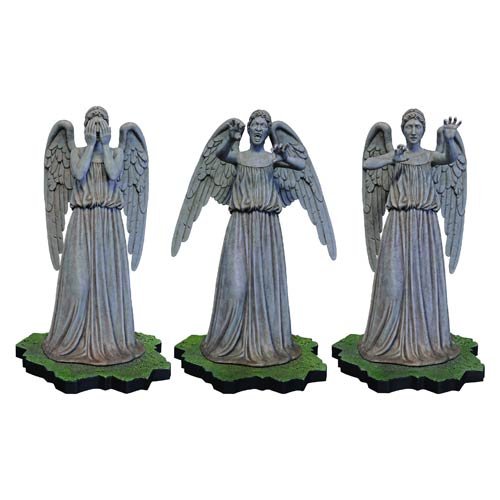 From BIG Chief Studios. As old as the universe, the Weeping Angels are the deadliest, most powerful, most malevolent life-form evolution has ever produced. Able to close distances of meters literally in the blink of an eye, they feed off the potential energy of the years their victims would have lived in the present, killing them in the past. BIG Chief Studios are proud to announce the first in a new series of 1:6 Scale Collector Polystone Figurines. Featuring three sets of interchangeable arms (Weeping, Grasping and Attack) and two alternate heads (Weeping and Attack) to adopt multiple poses, the figurine is cast from heavy polystone and comes complete with a mini diorama base. Purchase additional Weeping Angel figurines and link their bases together in a number of possible ways to create a larger display. Produced in a numbered limited edition, each figurine comes with a certificate of authenticity and is packed in a full color printed box. Stands 12" tall.